Surprising those who travel often is a quite difficult task. Today, I imagine the most exotic exotic to be in Bali, the most cheerful cheerfulness in Rio’s carnival, the best beach in Seychelles. Then, I think of Lampedusa, Viareggio, and I realize that the surprise often lays in the unexpected close to home. A few days ago, Seba secretly took me to Fidenza, near Parma. I took for granted that we were going to the Outlet. Instead, we drive past it and leave it behind: the destination was the Labirinto della Masone, a billion bamboo canes able to disorient me and make me loose my breath. I’ll try to explain myself in 7 reasons.

1 Because this maze was designed by a nut

2 Because this is not a rural experience: it’s way more chic than you may think

The area was designed by Pier Carlo Bontempi. For a DOC disneyanlike myself, he is famous for having designed part of the town Val d’Europe, next to Disneyland Paris. Now, I must admit that, from a distance, it slightly recalls Esselunga’s geometries and colors. But seen from close up it becomes a middle road between a small palace and the Cestia Pyramid. Familiar forms and materials. Colors from the plain and unexpected works of art.

3 Because we’re not used to getting lost anymore

The GPS (which no one calls like that anymore) and Google maps have solved a lot of problems and time lags. In the long run, however, we are being disoriented. We are no longer used to exploring, recalling the road, pulling down the window and asking – it’s true that men seems to have never done that.

We are so used to always being in the right place in the shortest possible amount of time, that we lost the beauty of being lost.

And in the Labirinto della Masone you lose yourself at least a few times. When you think you got the trick … you’re on the wrong way. We basically became the Indiana Jones of Cinisello Balsamo. 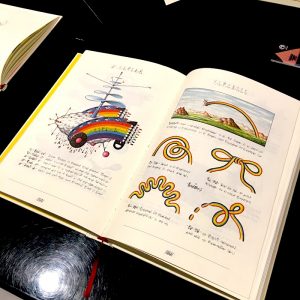 Browsing the Codex Seraphinianus’s pages is like living in a dream.

You go to Fontanellato for the bamboo labyrinth, that’s clear. What a shame, however, if you do not visit the museum on the first floor of the main building (included in the price). I do not fully understand many of the works, I’m just a goat-head, but I was very impressed with the library, with books by Franco Maria Ricci. And the Codex Seraphinianus in particular – some kind of Da Vinci’s Atlantean code, but so imaginative, so colorful, so detailed, that I would like to enter that world. And to be suddenly able to read its imaginary writing. Wow.

It’s an ideal getaway for these spring weekends. Or to skip lessons, sheltered from prying eyes. I would not swear it would be the perfect place for April 25th, because if it was overwhelmed, it would become noisy and confusing. Personally, I loved the peace it infuses. And this phrase makes me look so pure and thoughtful. 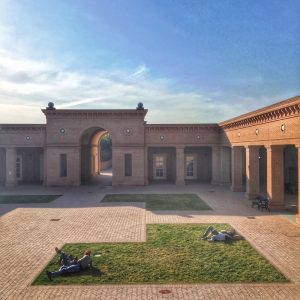 You can’t not sympathize with teenagers (or post-teens, like my 36 year old peers) who lay down right on the grass. They find the labyrinth’s blind angles for a quick clandestine make out session. They almost never happen now, with the anxiety that someone might catch you and put the picture out there. Also, they almost never happen because, in my opinion, people make out less than they used to. But this will be the topic of another post.

7 Because the bar at the entrance makes a great cappuccino

It’s no news, I mean, we’re in Italy. But if you pair it with a delicious dessert, like a glass of English, you got it. I also heard that the restaurant is really good – unfortunately I didn’t taste it.

If these 7 good reasons are not enough (especially the one on the clandestine make out session) to visit, we are no longer friends. Just so you know.