Vicenza: the city of courtyards, porticoes and shops

Vicenza is Palladio’s city. Palladio was a genius. Favorable? Contrary? Abstentions? There is nothing to discuss about it. Vicenza reminds it at every corner. The Olympic Theater, the Palladian Basilica, the magnets made in China and sold by the tobacco shops. 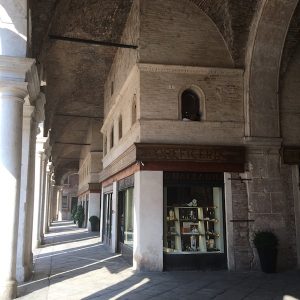 There is a hidden and discreet Vicenza, however, that I would like to share with every traveler. It’s not full of marbles that overlap the loggia, nor delightful bridges over the Bacchiglione.

The Vicenza full of porticoes

Beautiful, rich and poor palaces, like the ones in Mamma Maria. It is the city of the porticoes, the never-ending porticoes that frame the palaces, always low and always stretched. The city’s architecture is slender: tall and narrow windows and shutters. Regular porticoes that suddenly become crooked. Ceilings where the beams look as they were under a railway. Who knows which train is coming on the first floor… 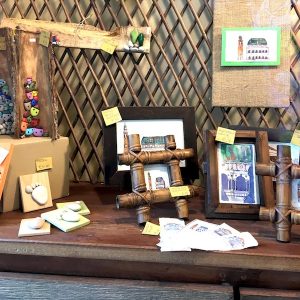 The Vicenza full of craft shops

Clearly, chain of stores reached this city as well as everywhere else. I have some kind of negative obsession for chains. I think about how cosmopolitan it seemed decades ago the arrival of Coin’s , how modern the appearance of McDonald’s and Intimissimi seemed. No more without Flying Tiger and H & M (ah, yes, the same that is closing the post-Fiorucci mega-store in Milan).

The real surprise of Vicenza, for me, is the craftsmanship resistance. Shops selling hats just like fifty years ago. Cafeterias and elts shops. Bambù, Eleonora – Nori – and her daughter Giorgia‘s shop, they not only import handmade items from around the world, but now also dedicates a showcase to artists and craftswomen from Vicenza. Women who get inspiration from their own city and create objects that represent its soul. 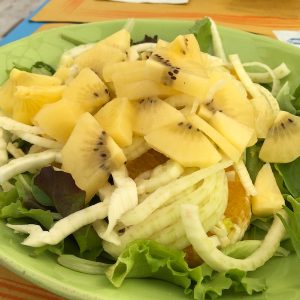 This is how I love living Vicenza. Peaking where there would seem to be nothing. Intruding into the courtyards, moving away gates that reveal greater treasures. The buildings in Corso Palladio, of course, but also, and above all, those houses that would look merely in order. It’s in Corso Fogazzaro’s courtyard that I found Antonietta and her Mifrulla, where she spends her days inventing new ways to combine fruits, vegetables and seeds to prepare good and healhty things. In the mornings, cakes and muffins without junk, in the afternoon elixir of life and outstanding salads.

Sometimes good music does not need high volume to be appreciated..

Not a coincidence that in front of her there is a record store – one of the few left in the city. Poetry on the one hand, music on the other. Such a beautyful courtyard.

One day in Vicenza

In the end, it is less than two hours by train from Milan and Bologna and it is a very good alternative to Verona and Venice, to visit a city-lounge, not invaded by tourists and with a real and human dimension that makes a stand. During the winter, the ladies dressed in furs in the city centre’s coffee shop. In the summer, students are finally free from lessons and exams. Here, any hour is good for a spritz, every bridge is good to make out.