Have your heart racing in the middle of a secret concert 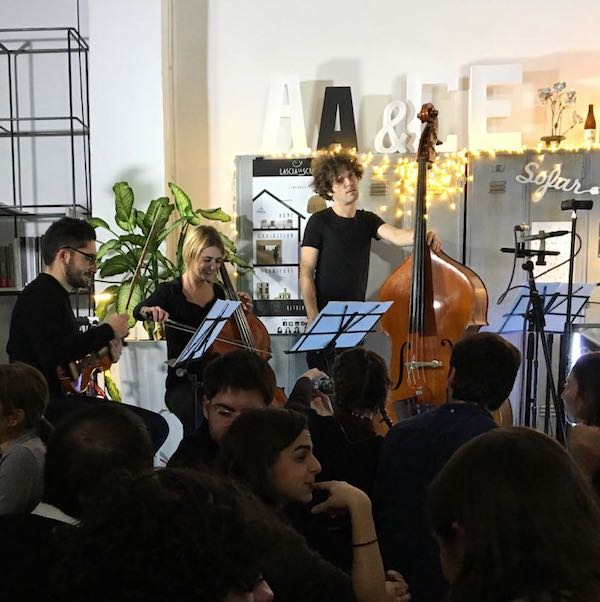 I have a weak spot for Indie music. Until recently, I thought it referred to something exotic, or somehow Hindu; but it is just means independent.

In a short time, I became obsessed with outcast CDs. A fan of mini-concerts in clubs all around the Brianza, a guitar and a microphone on a sidewalk downtown, notes that are not written for mass consumption, but that are felt in the belly and in the head.

Monday morning, the cyclone called Daniela, texts me with her third hand (the other two are busy finding places to restore and rent).

Want to come with me to a secret concert tonight?

I find myself in a loft run by five brilliant architects, on the cry of “do what you love, love what you do”. With free music and eighty other people, along with Balanders’ beer, craft microbrewery in Val Camonica, which I wasn’t able to taste because it was too good and was drained from the remaining 78 thirsty throats.

Without knowing it, we attended three heartfelt acoustic showcases. Abbracci Nucleari’s sweetness, Sylvia’s power, Dardust’s magic. Mesmerized for a few hours, surrounded by strangers who for once were not singing out loud songs heard again and again on the radio, but were listening.

This post is not dedicated to a slew of brands, it does not contain a list of links. It is simply an act of love for people who believe and daily work or volunteer to create an impact on the world.

No, there is no need for big budgets to get excited.

There’s no need for San Siro, nor Campovolo. What you need is the desire to listen to new music, to get our ears going. This excitement is in the air and there’s no yes or no that can stop it. It comes from those who turn their passion into a profession. Because they perform in a professional way, especially if they fill payslips or serve in a bar during the day.

When passion takes the floor, it beats any suspicion.

If we want it to.