Princi in Milan: the art of bread and love for customers 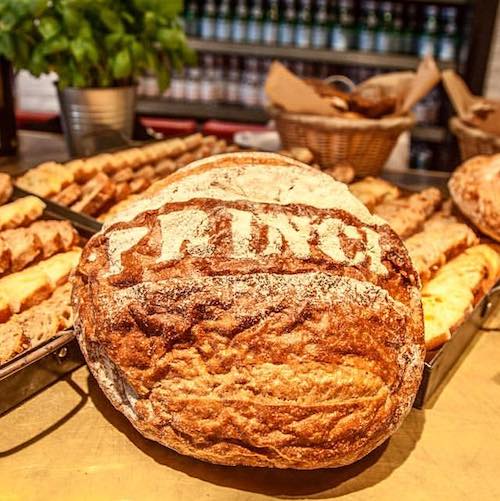 Pietro Princi is a 30-year-old man who looks younger. He followed in his family’s footsteps: his father founded one of Milan’s most famous bakeries. Pietro mastered his art, especially pastry. Early rising after early rising. Kneading, learning, making mistakes, kneading again. He is an expert pastry chef. And it’s not even his best dowry.

Let’s have breakfast at Princi, to fight the jet lag

Last Saturday, breakfast at Princi in 25 Aprile. If you live in Milan, you must know Princi, just like you know Le Colonne or Alcatraz. Its olives sticks and focaccia are well appreciated even by a picky Genoese like myself. By the way: this is the first place where a colleague took me to have a snack, saying “it is the non plus ultra” back in… forget it.
Seba’s glass of orange juice exploded in his hands. Literally. Master Yoda himself would be extremely proud of his ability to train the force. Juice everywhere, Zanzi miraculously unharmed, me spraying more blood than Tarantino in Kill Bill. Ok, I just got a little cut. I go talk to the girl at the counter and ask her to speak with a manager: I want to explain what happened – it could be a batch of faulty glasses. She remained stunned: I’m not angry, nor about to sue them. I just want to talk to the manager. She takes me to a guy in plain clothes, eating breakfast with his friends.

There he is, Pietro.

I do not have to say much. He jumps straight into action, firstly taking care of my surprise. Because I was not uncomfortable, I was like “oh damn, what just happened to us.” He is welcoming, nice, and sorry. Then he spends almost half an hour with us, not simply offering us a new huge breakfast. He tells us about his family, about his father Rocco who is insightful and endlessly enthusiast. He cares to know who we are and what we do.

Pietro is not only good at making sweets. He is great at figuring out who is good at making them and who can learn. He knows that relationships are the sweetest things that can be farmed. Pietro has inherited a profession and a place to carry it out, and realized that his art can be much more.

Very lucky, being the owner. Aha

Getting up early for a job you love definitely sugars the pill. But it is still a pill and not a profiterole. Waking up at night because you’re overwhelmed by ideas is a billion times better than waking up to the fear of not making it. And slowly the beautiful work becomes a sort of Dementor. Ok, this was extreme. Let’s just say that there is never a time when we want to say “ok, this is enough, though”.

Pietro is here, on a Saturday morning with his friends. In plain clothes but never off-line. He is someone that would behave the same even if the place was not his own. Someone who feels. Who got it. He spends more time listening than on instagram.

He realized that the difference we make in the world depends on what we do and how we do it. It is made of consistency and heart. To be there without hiding. Giving the customers much more than they’re asking. Anticipating their needs and using empathy.

He realized that the world is already a better place, if we want it to be.

Discover many more articles about Milan and explore the city like a local!